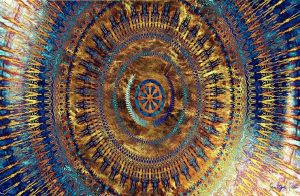 Sudarshana is the chief and main deity of the powerful Sudarshana Homa. Sudarshana is a manifestation of Lord Vishnu portrayed holding the Chakra on his rear right hand. In the other 3, Vishnu (or the Protector) holds a Gada-mace Shanka-conch and Padma-lotus.

Lord Vishnu uses his mighty weapon „Chakra” to grant immediate relief to the sufferings of his followers. It is a potent weapon to destroy the enemy and among all of Vishnu’s weapons and it is a mobile instrument.

It implies that Vishnu is the true keeper-owner of celestial bodies in the three lokhas. Sudarshana is also considered to be the first stage in the bhakti (devotion) path towards God realization. He is also known as Chakarth Thalzhvaar in Tamil. This brings the translation as „Sage of the Wheel.”

Sudarshana is also worshiped and adored as Paramapurusha and Ayudhapurusha. Additionally, He is worshiped by Vaishnavas devotees and viewed as the Deity who helps them to clear the difficult path from hindrances to attain the lord.

In addition, an identified disease os mental or physical suffering oe some kind of problem in the official and personal life of the practitioner is cured. Dwadasi, Ekadashi, Saturday and Wednesday are believed favorable times to practice with the mantra.