A Zen circle, or Ensō, is an ancient element of Japanese calligraphy and a sacred symbol of Zen Buddhism. Completed with a singular brushstroke making a circle, it symbolizes a vast variety of concepts. The zen circle plays with the idea of perfection and imperfection – seemingly perfect in its continuity and balance, it is often irregular in shape and highly individual depending on the Zen master who paints it. With variations in ink, brushstrokes, shapes of the circle and positioning of the beginning and end of the zen circle – ensō also serves as an expression of individuality of the Zen master behind it.

Ensō was also the first symbol created in the Zen Buddhist tradition. It is said that the very first ensō ever painted was brushed for a student in need of an image to meditate upon, as a visual representation of the concept of enlightenment. The earliest painting of an ensō was recorded during the life of its creator, the Chinese Zen Master Kyozan (814-890). Even though at first it might seem that enso is nothing but a miss-shapen circle, the symbol has a deep ancient meaning. Historically, Ensō symbolizes “Zen” or the moment of absolute enlightenment. It is a concept tightly associated with Zen Buddhism, especially in Japan.

The zen circle is an ancient symbol that takes on a variety of meanings and concepts. It symbolizes many more things, for instance some of the common subjects are: inner strength, elegance, vast space of the Universe and the void, the circle of life and death, cyclical nature of life, acceptance and beauty of imperfection, refinement of consciousness, the moment of creation, perfect harmony, the state of natural “flow” and continuity of energy. It also is a symbol that represents the singular moment in time when the artist creates.

This incomplete brushstroke of the circle symbolizes the beauty and “perfection” found within imperfection. It is a concept that resonates throughout various cultures, ideologies and religions. The enso is a symbol of attaining complete spiritual and mental enlightenment, which also makes this symbol so valuable. The hand-drawn circle in itself is not only a sacred symbol or a calligraphic practice, but also a spiritual lesson and part of the Buddhist practice.

In Zen Buddhism, Enso also symbolizes the moment when the mind and body are in the perfect state of “flow” – in other words, the moment when the creator of a true ensō is in a state of creative flow, letting their mind and spirit create freely. Once the brushstroke is completed, there is no possibility of changing the zen circle – thus reinforcing the idea of the circle portraying the expression of the creator’s mind and spirit at this specific moment in time.

Zen Buddhism practitioners firmly believe that the way an artist draws a true ensō fully exposes their character. Moreover, they believe that only a person that is complete spiritually can draw a “perfect”, true zen circle. Some practitioners will even go as far as drawing an ensō as a daily practice, as a part of their spiritual practice and meditation practice.

Even though an enso is seemingly easy to draw, only a few Zen masters are known to be able to create a perfect zen circle. It is believed that the expressive movement of their brushstroke shows their level of mastery of Zen practice, revealing their level of enlightenment. It is also said that only a Zen master is able to create an enso that releases the full power of the symbol, thus helping their students and others to achieve higher consciousness levels by meditating upon it.

Oftentimes, Zen masters will draw a correct circle every single day and present their students with the creation so that the students can meditate on their teacher’s enso on a daily basis. Traditionally, an ensō circle is drawn on thin Japanese rice paper, called washi, with a circle brush. However, it can also be drawn in the dirt or written in the air, although historically, it is a practice of Japanese calligraphy and ink painting, which is called sumi-e. The zen master usually meditates in silence for a long while in front of the paper and brush. Then, he will pick up the brush and complete the enso circle in one motion, as a form of expression and reflection of the state of the master.

Once the zen circle is completed, the artist does not change it. This further perpetuates the idea that the enso was created as a representation of a singular moment of creation in the life of the artist. As it is mentioned above, painting an enso is also a spiritual practice that can be performed as often as once a day.

This symbol of enlightenment can be drawn either by itself, or next to any sort of inscription: it could be a quote, a poem or simply words of wisdom said by the master behind the enso or someone different. The inscription is most commonly situated next to the ensō, however it can also be located anywhere on the paper – at the top of the zen circle, at the bottom or even on the inside.

Traditionally, the inscription is a quote from a Zen master or a Buddhist text, however it can be anything. It is common for the inscription to be humorous and offer some wisdom or insight in the form of a light-hearted haiku, reminding us to enjoy our time and not take earthly matters too seriously. It is also common for the artists or zen masters to “sign” their enso by adding their name on the paper as well.

How to Create an Ensō?

Contrary to what you might think, you do not need to be a buddhist zen master in order to paint this circle of infinity. Painting an enso doesn’t require any special skills either. The secret here lies in your intention, as well as your level of spiritual consciousness and enlightenment.

You might want to paint an enso in order to better grasp the concept and to meditate upon it. Or, you might want to hang a drawing of a zen circle in your house as a symbol of wabi-sabi, a Japanese aesthetic commonly used in interior design. Alternatively, you could be interested in drawing an enso because you would like to have a zen circle tattoo that you have painted yourself. Either way, you can absolutely achieve a “perfect” enso! After all, its perfection lies in its imperfection 🙂

Here is how to draw a zen circle:

By the way, here are some tattoo ideas to get you inspired in case if you are looking to get an enso tattoo: 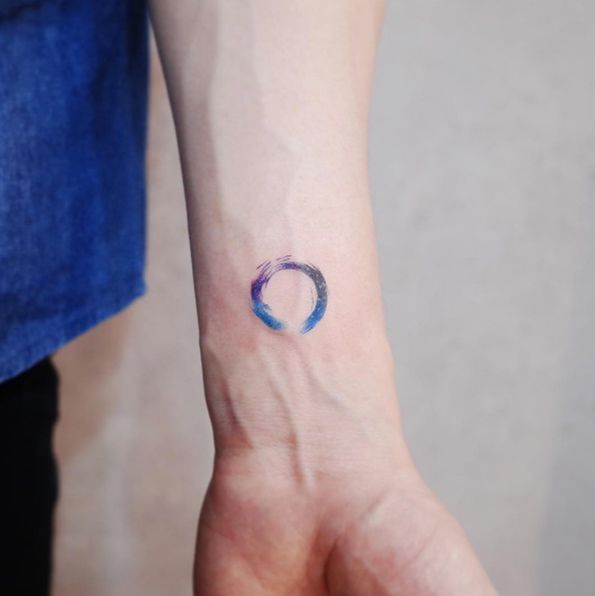