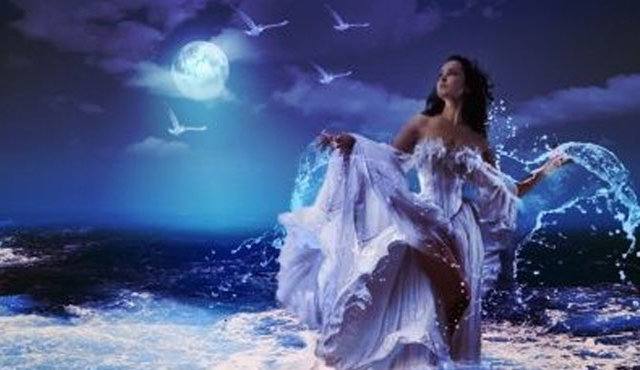 „A celebration of the moment when the river meets the ocean. Yemaya is the Goddess of the ocean and the mother of all Goddesses.”

Yemaya is a spirit from the Yoruba religion. The Goddess Yemaya is an Orisha and the mother of all Orishas. She is the source of all the waters, including the rivers of western Africa, particularly the River Ogun.

In Yoruba mythology (found primarily in southwestern Nigeria), Yemo̩ja is a mother spirit, the patron deity of the Ogun river, patron spirit of women, particularly of pregnant women, but the Goddess is also worshiped at creeks, streams, springs, and wells. Anywhere there is water flowing.

The Goddess name is a contraction of the Yoruba words „Iye omo eja” which roughly translates as „Mother whose children are like fish.” This signifies the vastness of her motherhood, her reign over all living things and her fecundity.

Goddess Yemaya’s colors are blue and white, and She is said to wear a dress with 7 skirts that represent the 7 seas, which represent the waves in the ocean. She represents the creative and nurturing forces of the sea. When it comes to caring for others, Goddess Yemaya impulses are comforting and sincere. And she has a love for children that is unequaled.

According to legend, Goddess Yemaya’s first gift to humans was a sea shell in which her voice could always be heard. Even in present day, we honor the Goddess when we hold a shell to our ear in order to hear her voice, the ocean.

In West Africa, the Goddess is worshiped and adored as a high-ranking river deity, not a sea deity as she is worshiped in Cuba and Brazil. River deities in Yoruba land include Yemoja, Osun (also known as Oshun), Oba, Erinle, Yewa. Olokun fills the role of sea deity in Yoruba land.

Ide Were Were Nita Ochun – Goddess of Love